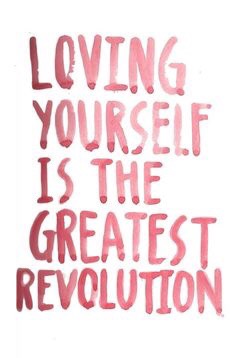 I want to preface this blog by stating that it is NEVER ok to treat someone like shit simply because of the way they look.  If you treat someone as lesser of a human because you don’t find the individual to be aesthetically appealing, you’re an asshole.  However, it is ok to challenge and criticize others ideas.

If you’re the type of body positive advocate who thinks you should like yourself even if you’re abusing your body, you may want to stop reading.  X out of this screen, do not pass go, do not collect $200. This blog will only piss you off, you will end up taking the things I say as a personal knock against you, instead of me being critical of harmful ideologies.

No one should hate their self. Self hate doesn’t get anyone anywhere.  Self hate doesn’t promote change, it often just causes depression. Depressed people are less likely to make positive changes.  HOWEVER, it IS ok to not like yourself.  If you aren’t the best you know you’re capable of being, it’s perfectly ok to look in the mirror and say. “Ya know what?  I’m selling myself short, I can be better, I can be happier, I can be healthier.”  It’s ok to strive for better.  It’s ok to look in the mirror and say, “Ya know what?  I don’t really like that muffin top, I’m going to construct a healthy eating plan and maybe start working out”.  If someone is an ugly person on the inside we encourage them to change and become better.  Why don’t we do the same when it comes to our health?

What I see with many body positive bloggers is that they’re simply settling for what they have, rather than striving for better.  It comes across as an attempt to be contrary to societal norms.  They’re trying to sell it to other big girls that changing your outer appearance is society’s way of telling you to hate yourself.  In some kind of backwards, spiteful stance many body positive and fat positive people are hurting themselves in an effort to tell society to fuck off.  These people are telling you to not care what society says, yet society is driving them to act a certain way and treat their bodies a certain way.  It’s much easier to settle than it is to change.  I say this as someone who IS fat. I say this as a woman who has lost 100 pounds.  I say this as a woman who has struggled with finding her place within society.  I say this as a woman who truly doesn’t give a shit what other people think of me.  What *I* think of me is the only thing that matters to me.  Part of loving yourself, is not abusing yourself.

Whenever we see a woman who suffers from an eating disorder such as anorexia or bulimia, society pities her.  We don’t say, “look at that woman living how she wants to live, YASSSS!  Good for her!  Get it girl”!  Why do we champion obesity? Why do we look at severely overweight women (Think, Tess Holliday) and say, “You go girl”!  Being morbidly obese IS suffering from an eating disorder.  Being obese is just the other extreme end of the spectrum.  When it comes to things like anorexia and bulimia, we see these individuals as suffering from mental illness.  We encourage change to become healthier.  We tell them that there IS something wrong with the way they’re living.  We don’t accept their ideology as healthy.  We see them as sick.  Overeating to the point of obesity and calorie restricting to the point of severe malnutrion are both signs of emotional issues and should both be treated the same.  Neither should be encouraged.  We should of course be empathetic and we shouldn’t treat these people as if they’re less.  We should not view either as some type of false empowerment.

If your best friend was in a relationship with a man who abused her in some way, would you tell her it’s ok to settle for him?  Nope.  You would likely give her a pep-talk about how she deserves better. You would tell her how wonderful she is and how she deserves to be treated like the amazing girl she is.  So why when it comes to our own bodies we’re ok with settling?  We are ok with abusing ourselves.  We accept it and attempt to turn our self-destruction into empowerment.

Let me end this blog the same way I prefaced.  It is NEVER ok to treat someone badly because of their physical appearance.  That is always unacceptable.  It is acceptable to question and criticize harmful ideologies.  If you find yourself being hurt by the words of someone else you probably need to do a little soul searching and figure out why words hurt you.  You may just find that you aren’t as happy with yourself as you believe. Love yourself enough to stop self destructive behaviors.